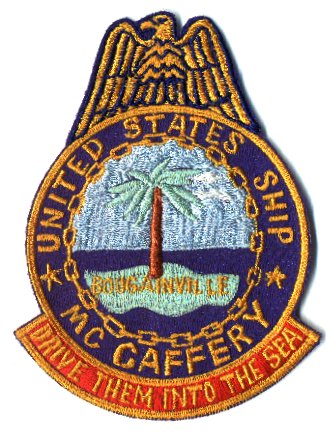 Naval History McCaffery began her service in the Pacific in early 1946. With aggressions in the region recently over, the ship provided escort support and operational training for approximately a year before returning to the US. McCaffery later returned to the region in February 1948 to perform search-and-rescue operations in the region between Okinawa and the Chinese mainland.

In 1950, McCaffery was reclassified an escort destroyer (DDE-860). She was then reassigned to the Atlantic fleet—but when she was halfway to her first destination (a port in Greece), tensions erupted in Korea. The ship was quickly redirected. She then spent approximately six months performing plane guard and screening duties off the coast of Korea in support of the U.S. effort.

In 1951, the ship returned to the U.S. and spent much of the following decade involved in a variety of peacetime duties: cruises to the Mediterranean, hunter-killer exercises with a variety of other ships, training with South American fleets, and supporting NATO operations in the North Atlantic.

In 1961, McCaffery received her fleet rehabilitation and modernization (FRAM) upgrade, and in 1962, she was reclassified as DD-860. The 1960s included supporting NASA missions and recovery efforts, training with a variety of European fleets, and various goodwill missions. When the conflict broke out in Vietnam, McCaffery was dispatched to the region to offer artillery support along the coast.

Asbestos Risk on the USS McCaffery (DD-860) Because asbestos could be used in so many products, the dangerous fibers could be found in almost every compartment on McCaffery. Many areas on board the vessel were filled with heavy machinery and thus contained more asbestos. The engine and boiler rooms on McCaffery used asbestos in large quantities to insulate pipes, to line steam boilers, and to insulate elements of the ship's engines or steam turbines.

No matter what job a crewman had, sailing on a Navy ship meant asbestos exposure to at least some degree. Most shipyard workers also suffered greater-than-normal exposure, as repairing and refitting ships required handling dangerous friable asbestos products. When individual asbestos fibers are inhaled, they damage a membrane called the mesothelium and eventually cause mesothelioma cancer. There are usually legal options for Navy veterans and shipbuilders diagnosed with an asbestos-related disease.